The Harvest of Hope

“I want to see Zoe Empowers expand into more areas of Malawi because it is unique from other organizations I’ve been registered with. Those programs didn’t solve my problems. They would just give me food and go. Instead of giving fish, Zoe Empowers is giving fishing sticks so we can do it on our own.” ‒ Edward, 3rd Year (Malawi)

Compared to the need for food, clothing and shelter, tribal traditions are often less recognizable at-a-glance but can be a significant challenge for orphans before the Zoe Empowers program. In the case of Edward, he and his three younger siblings were living in rural Malawi in their father’s home village when both their parents passed away unexpectedly. Instead of offering comfort and support, their paternal relatives chased the four siblings, all under the age of 14, out of their home because they no longer had living lineage to the village, telling them things such as, “Your life is over. There’s nothing you can do.” Edward and his siblings found refuge in a vacated storage shed in their mother’s home village.

Less than 60-square feet in size, the small brick room’s thatched roof and door had large holes, leaving the child-headed family exposed to various elements, including rain and mosquitoes. Edward and his siblings relied on a single rapa, a thin piece of fabric traditionally used by African women for skirts, to keep warm. Each day, Edward worked hard to secure piece jobs, such as cultivating land or running errands, to earn a single meal, usually corn, for his siblings. “When we moved there, that was when we began to know the hardships of being an orphan,” explained Edward. 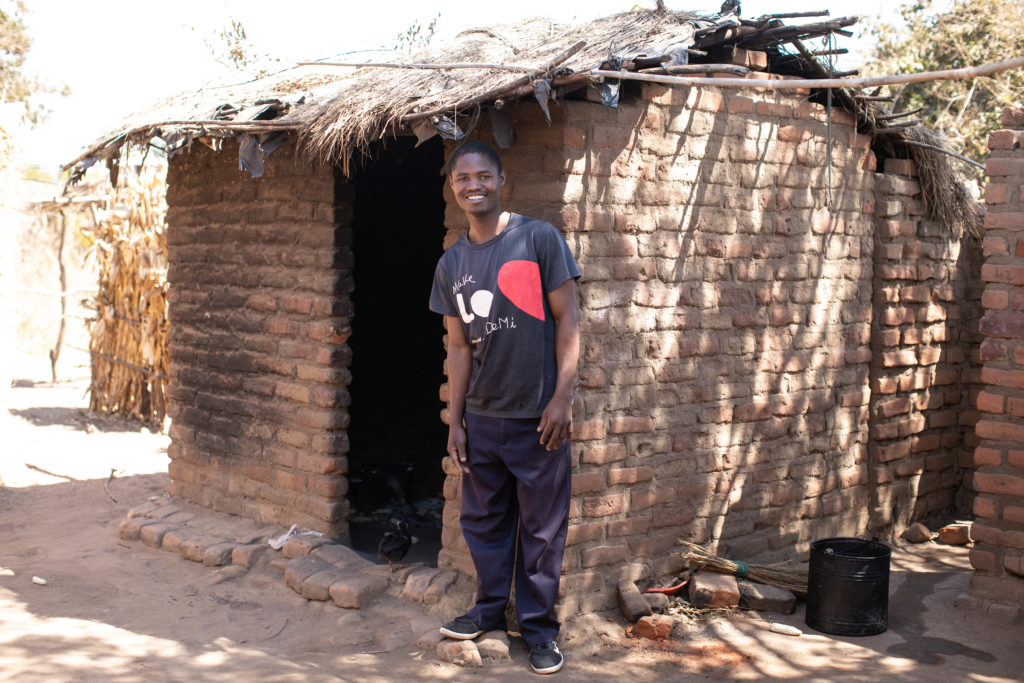 Photo of Edward in front of former home that has now been repaired and is used as a kitchen.

When asked if he had dreams during this time of his life, he responded, “I had dreams but they were not colorful dreams, because I didn’t think I could achieve them.” He dreamed about getting enough food for his siblings, so they could all be healthy. He also dreamed about having a secure house, one that didn’t leak during storms and that had a door with a lock.

In May 2017, Edward and his siblings were accepted into the Zoe Empowers program. Because he was recruited after the 2017 harvest, Edward chose to focus on starting a small shop to sell groceries and other personal care products. He was diligent about saving his proceeds from the store to invest in seeds and farmland for the 2018-2019 planting season. Last fall, Edward rented 11 acres of farmland to plant peanuts, corn, soybeans and groundnuts. 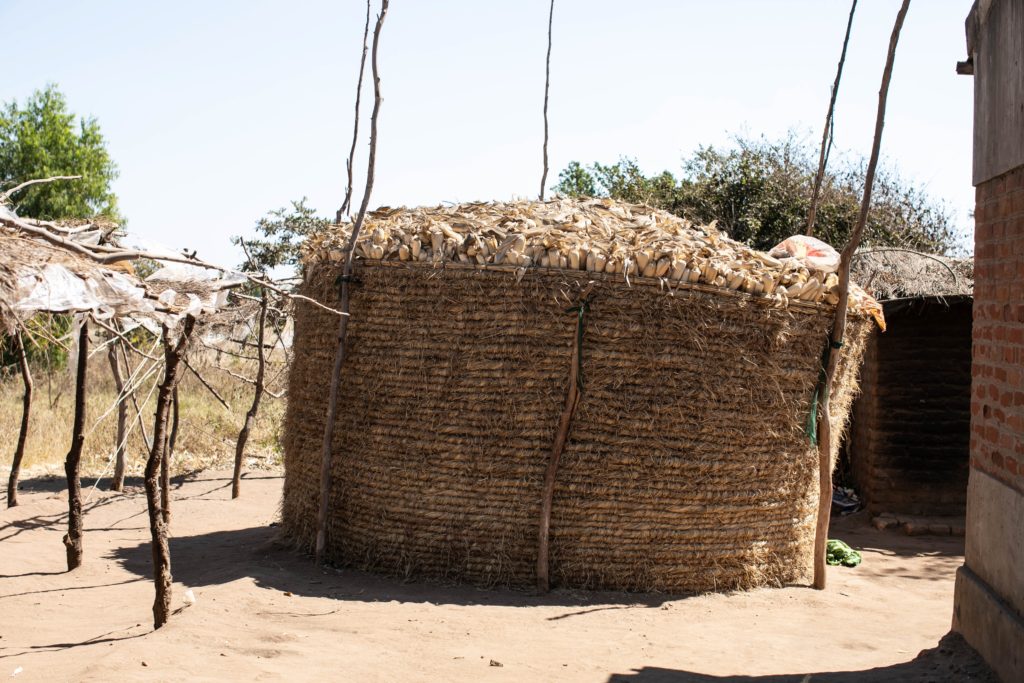 While all his crops yielded great results this spring, his bumper harvest of corn stood out among other Zoe Empowers children. Edward currently has more than 110 bags of corn in storage, ready to be sold. One bag of corn sells for roughly $14 giving him a total of $1540. He used some of his earnings to invest in 15 bales of tobacco, a major cash crop in Malawi. Each bail is worth roughly $154.

Over the summer, Edward chose to temporarily close his grocery store to manage his harvest and diversify his income streams with the purchase of a motorbike. He employs a young orphan, Oswald whom Edward adopted into their family. Edward asks Oswald for a modest $4/day allowing him to keep the rest of his daily earnings. Additionally, Edward employs Masawu to watch his cow. Because Masawu has special needs, tending to Edward’s cow has proven to be the perfect job for him, and it has brought him a lot of happiness to be able to help Edward while earning a fair wage. 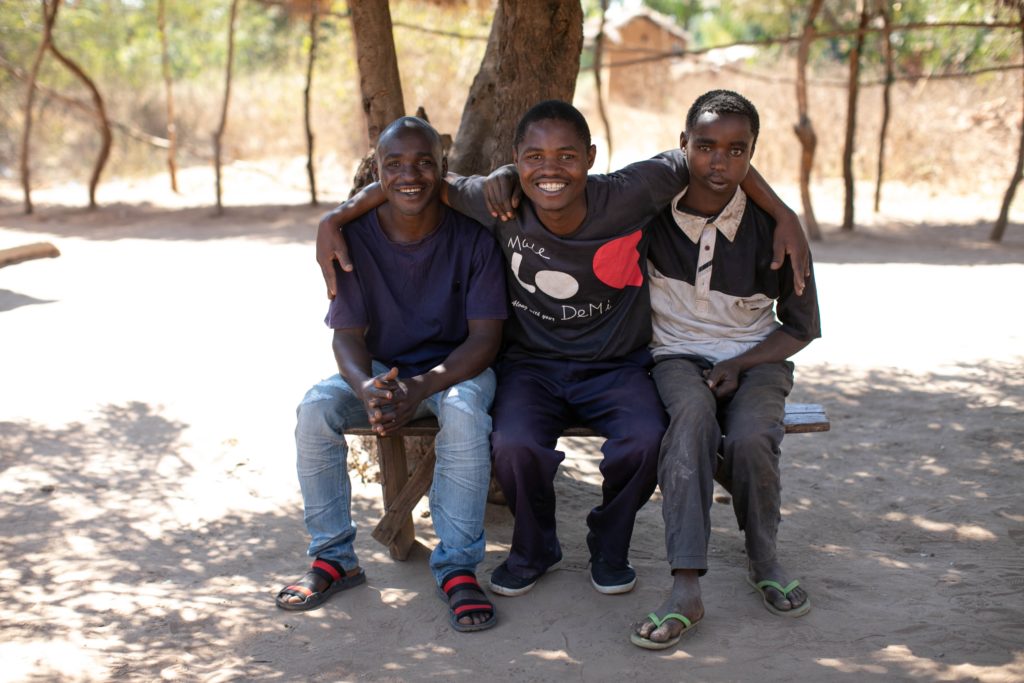 Beyond his business success, another notable achievement for Edward is the construction of his new, multi-room home, which sits directly in front of the storage shed he and his siblings occupied just two years ago. The shed is now used as the family’s kitchen. Primarily composed of cement and brick, the new home features glass windows, a tin roof and a wooden door with a lock, just like Edward dreamed about. There is plenty of space for his three siblings, plus Oswald. Edward is able to pay the school fees for all four of his siblings. A small addition was added to the front of the house for the grocery store, making it easy to open and close the shop during different seasons. 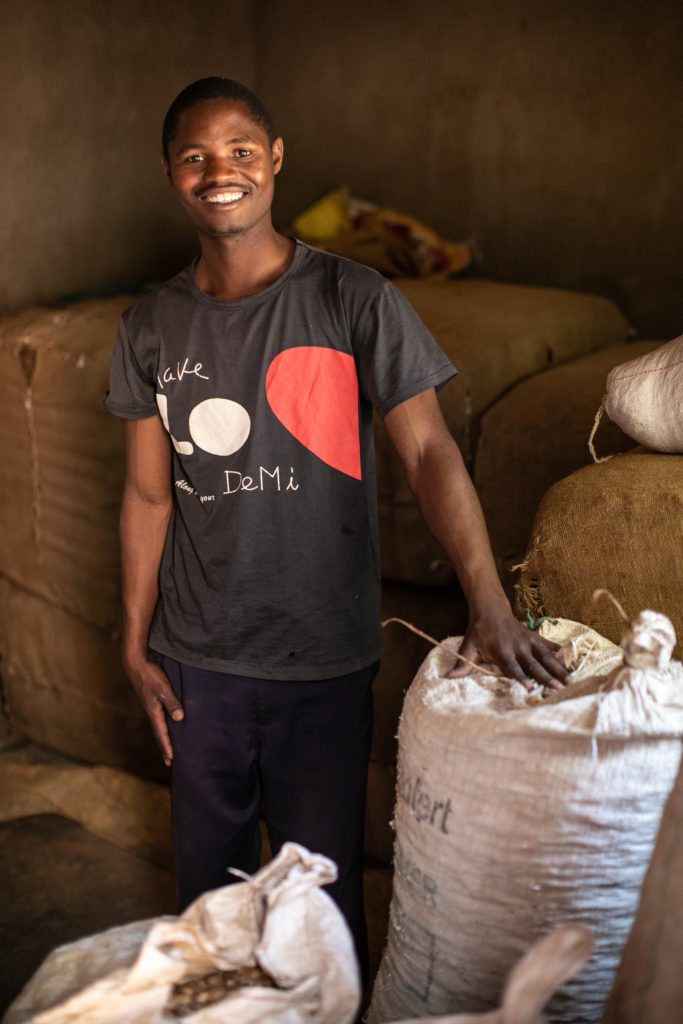 Edward inside his new home standing next to his stored harvest and shop inventory.

With one year remaining in the Zoe Empowers program, Edward has evolved his goals, since he already achieved what he never thought was possible. His eyes brighten and his smile grows as he talks about his aspirations to own a mini bus to expand his transportation service. But more than anything, he wants to help the Zoe Empowers program expand its reach in his village. He says community members often come to him for advice because they’ve witnessed his success and transformation. He sees a sincere need for others to receive the same training and support as him, and he believes Zoe Empowers is the answer.

“The death of people extends past the area where I live. I reach out to as many orphans in my community as I can, but I am only one person. When will Zoe Empowers expand to other areas to reach more orphans?” asked Edward. “I am very successful because of this program. Others have seen my transformation, and the news has traveled to other villages. Many people come here to meet me. Sometimes, they come to beg or ask advice about how I achieved my success. They share about their issues since they also lost their parents. I want to see Zoe Empowers expand into more areas because it is unique from other organizations I’ve been registered with. Those programs didn’t solve my problems. They would just give me food and go. Instead of giving fish, Zoe Empowers is giving fishing sticks so we can do it on our own.”

A monthly gift of $8 has taken Edward from extreme poverty to being a happy, healthy, successful businessman, employer to two orphans and provider to four siblings (one adopted).

How many children like Edward can you give lasting sustainable change?