“I want to remind them [orphans in her community] to not see themselves as down. They should see themselves as high, that they can do whatever they want. Since I have suffered and changed, I want to encourage others to do the same.”

As a young child in rural Malawi, Suki Makalani had a good life. Her mother was a housewife, while her dad worked hard to provide for the family. She attended school with her three younger siblings. The family could afford to eat regular meals, wear clean clothing and maintain a fine home.

Life changed in the blink of an eye when Suki’s father fell ill. After a two-month stay at the local hospital, he passed away. Not long after, her mother also became sick, forcing her to become the head of her household at age 14. In an effort to make ends meet, she dropped out of school to sell vegetables in the marketplace. “Community members use to mock me at the market,” Suki recalled. “They’d say things like, ‘Look at her. Her dad died and now she has to sell vegetables’. It hurt me to hear those things.”

Despite feeling alone and discouraged, Suki kept working. Her bravery and strong will to persevere powered her through the dark times, times of uncertainty and pain. She prayed for a better life, the one she remembered before her father’s passing. In 2013, she received the opportunity to create the life she envisioned when she was accepted into the inaugural Zoe Empowers Malawi program.

Suki excelled in the program curriculum and quickly bonded with her empowerment group. Her charisma and bubbly personality began to surface. One year later, in 2014, she started her hair salon naming it ‘Aunt Yankho Salon’, meaning ‘the aunt with the answers’. Her maternal nature and desire to help has led her to be a mentor to many children in her community and in the Zoe Empowers program. Profits from her salon allowed Suki and her siblings to go back to school and invest in pigs and tobacco.

Over 90% of Malawi graduates report having a savings in livestock or other assets.

By the time she graduated from the program in 2015, Suki had saved enough money to construct a new home for her mother, whose health had improved, given Suki’s ability to provide regular nutritious meals and medication. She completed her secondary education and went on to college at Lilongwe Technical College, in the country’s capital city located about one hour from her home village. To avoid the cost of on-campus housing and to keep her salon business growing, she commuted back and forth for two years.

Suki received a degree in Rural and Community development in 2019. She is proud to now call herself a college graduate. In the same year she also added onto her business by opening a cosmetic accessories shop right next door to her salon business. Her two businesses require the help of one full-time employee and all three of her siblings.

In 2019, Zoe Empowers Malawi staff agreed to bring Suki on as an intern. Her outgoing, positive spirit and love for life is apparent in every ounce of her being. The continuous cluster of community members gathered around her salon or shouting their well wishes as they pass by are a testament to their respect and admiration for her. As a 22-year old business woman and primary school dropout turned college graduate, she aims to be a source of light and voice of encouragement to children in the program and in the community.

When she sees other orphans in her community, she prays that they, one day, can testify the way she can now testify. It is her wish to help more orphans by providing business capital. In the meantime, she will continue to run her businesses, intern for Zoe Empowers and seek out career opportunities in social work.

$8 a month can change that.

A monthly gift of $8 over 3 years empowers one orphan out of poverty. How many children like Suki can you give lasting sustainable change? 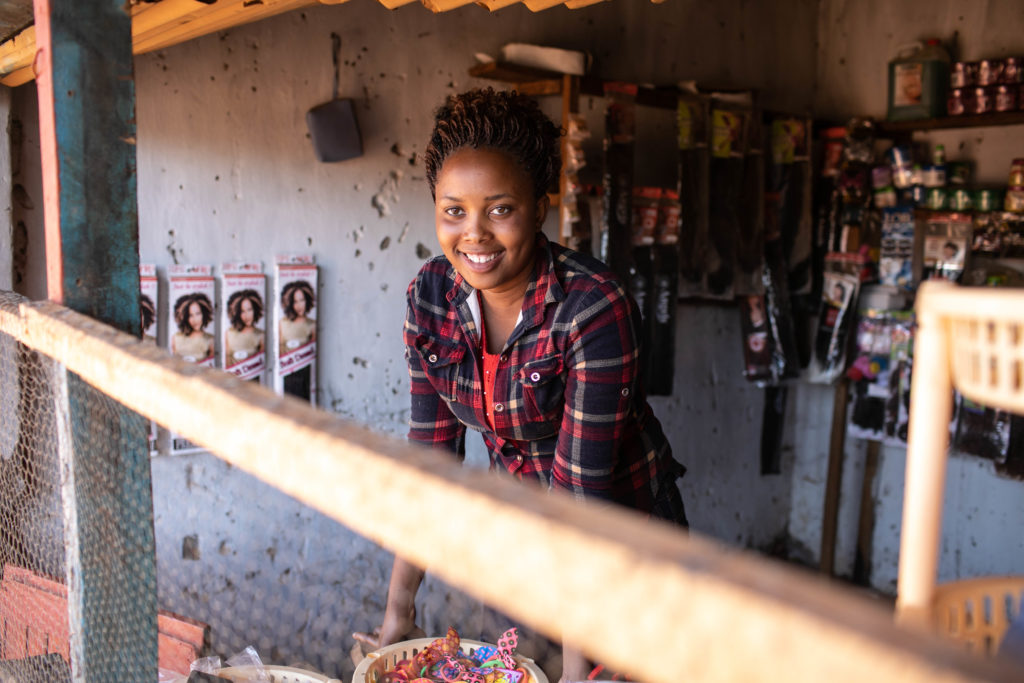