“Before Zoe, I prayed to God, asking him to help me complete school. I made a promise to God that when I got a job I would help other children. When I was hired by the government, I made good on that promise.”

Even before she knew about the Zoe Empowers program, when she was suffering physically and emotionally, Madeline had a dream to help other children in her community. However, given her orphan status, Madeline, who was a young girl at the time of her parents’ death, could hardly help herself or her brother, Jean de la Croix, through each day.

Food was scarce and as a result, she and Jean de la Croix were severely malnourished and ill. The two siblings had a home, but its condition made it practically inhabitable. Attending school was a luxury Madeline dreamed about and prayed for daily. When she was accepted into the Zoe Empowers program in 2012, Madeline made a commitment to herself and to God that she would live out her dreams.

Comprised of 130 members from 56 households, the group’s first task was to name themselves. They settled on “Hope” as a symbol of what they believed their lives would become over the following three years. Although the children faced multiple challenges at the start of the program, most took a backseat to starvation.

After learning basic farming techniques within the first few months, the Hope group developed an income generating project around farming corn, cassava, beans and potatoes. Over the course of a couple harvests, all members of the group were eating more and higher quality meals, in addition to earning income to be put toward the group’s bank account that would later be loaned out to individual members to start businesses of their own.

Madeline and her brother, Jean De La Croix on their farm in 2012.

Once Madeline and Jean de la Croix understood the fundamentals of farming, they applied their skills on their own property by growing a vegetable garden for their family and starting a goat breeding business. The goats provided the family with milk, fertilizer and enough income for both of them to return to secondary school.

Consuming regular, nutritious meals helped Madeline feel energized and excited about each day, a feeling that was new to her. She found comfort in knowing where her next meal would come from. Healthy meals, in combination with personal health and hygiene training, significantly reduced illness. As more and more of her basic needs were met, she began to look for ways to work toward her larger vision of helping others in her community.

After graduating from the program in 2014, Madeline, then 20, was hired as an executive secretary for the Gisagara District. (Districts are similar to U.S. counties) With that job, came power and influence. When she became aware of multiple orphans in the community dropping out of school, she considered it a calling to put her knowledge into action.

Madeline standing in front of her office.

Madeline took the initiative to invite the orphans into a small group to teach them the lessons she learned while in the Zoe program. She contributed a small amount of her own income to the group’s bank account every week. Eventually, the group saved enough money to start a project selling bananas and avocados. Income from their group project funded the hiring of a seamstress and a barber to train the children to start their own businesses.

Although Madeline was financially secure, it wasn’t feasible for her to personally support the lives of 20+ group members, which is why she sought out training for them. “I realized that I could help without having a lot of money,” explained Madeline. Just like the Zoe program, training is much of the investment, but it has the most sustainable long-term impact.

Today, Madeline has supported five group members in starting their own tailoring businesses and four barbers. The children in her program view her as a parent, and she cares for them like one, too. “I’m so proud of them. They no longer beg and they can meet their own needs,” Madeline said.

“We were suffering so much when Madeline found us,” one young woman in Madeline’s group explained. “She was a very good advisor. This project helped us meet all our needs. We don’t want to disappoint her and are motivated. She inspires us.”

If working her government job and running a small Zoe Empowers-like program didn’t keep her busy enough, Madeline also adopted an orphan in the community who is currently enrolled in secondary school. Jean de la Croix went onto college, something he never thought was possible before Zoe Empowers.

“We have no way to express our feelings. You [Zoe donors] did so many things for us. Wherever we are now is because of you and God. We are full of joy because of you. We promise we will never be a coward and will continue the steps Zoe showed us. We know that tomorrow will be OK. My dreams have been made a reality.”

Like her brother, Madeline, too, believes she is living her dream by serving the children in her community who need it most, just like she once did. “I don’t want to be a leader,” she said. “I just want to help people.”

Madeline may not consider herself a leader, but the ripple effect of her impact in her community says otherwise.

Millions of young leaders like Madeline exist around the world, just waiting for their opportunity to live out their God-given potential.

$8 a month can change that.

It only takes $8 a month for three years to bring a child from begging for food as a way to survive to never relying on charity again. How many children’s lives will you change? 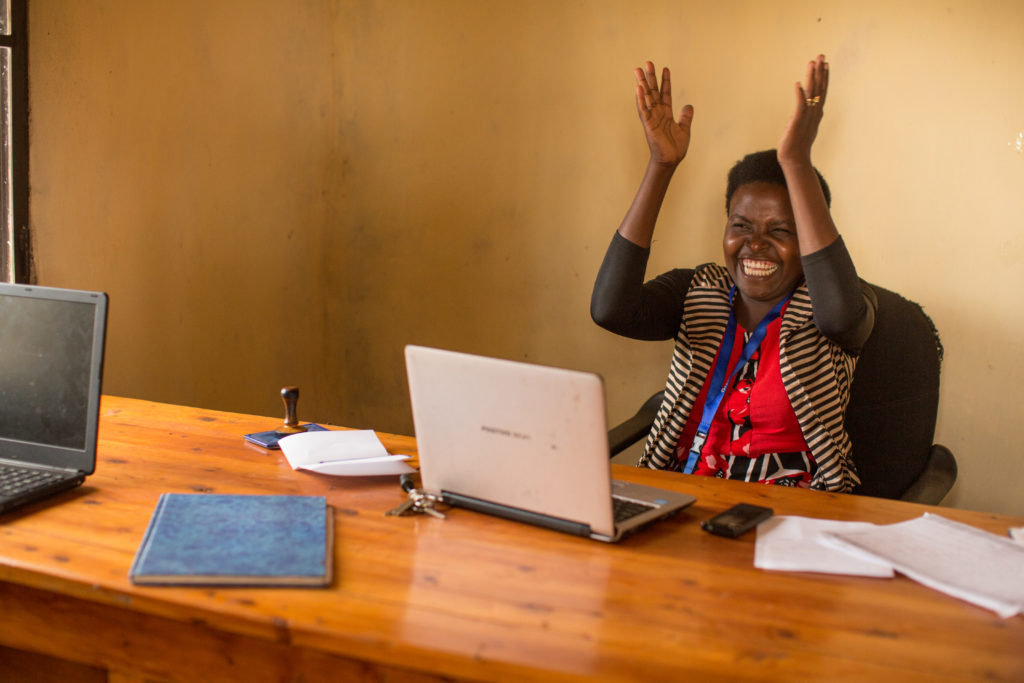 Madeline celebrating her job as a government official. 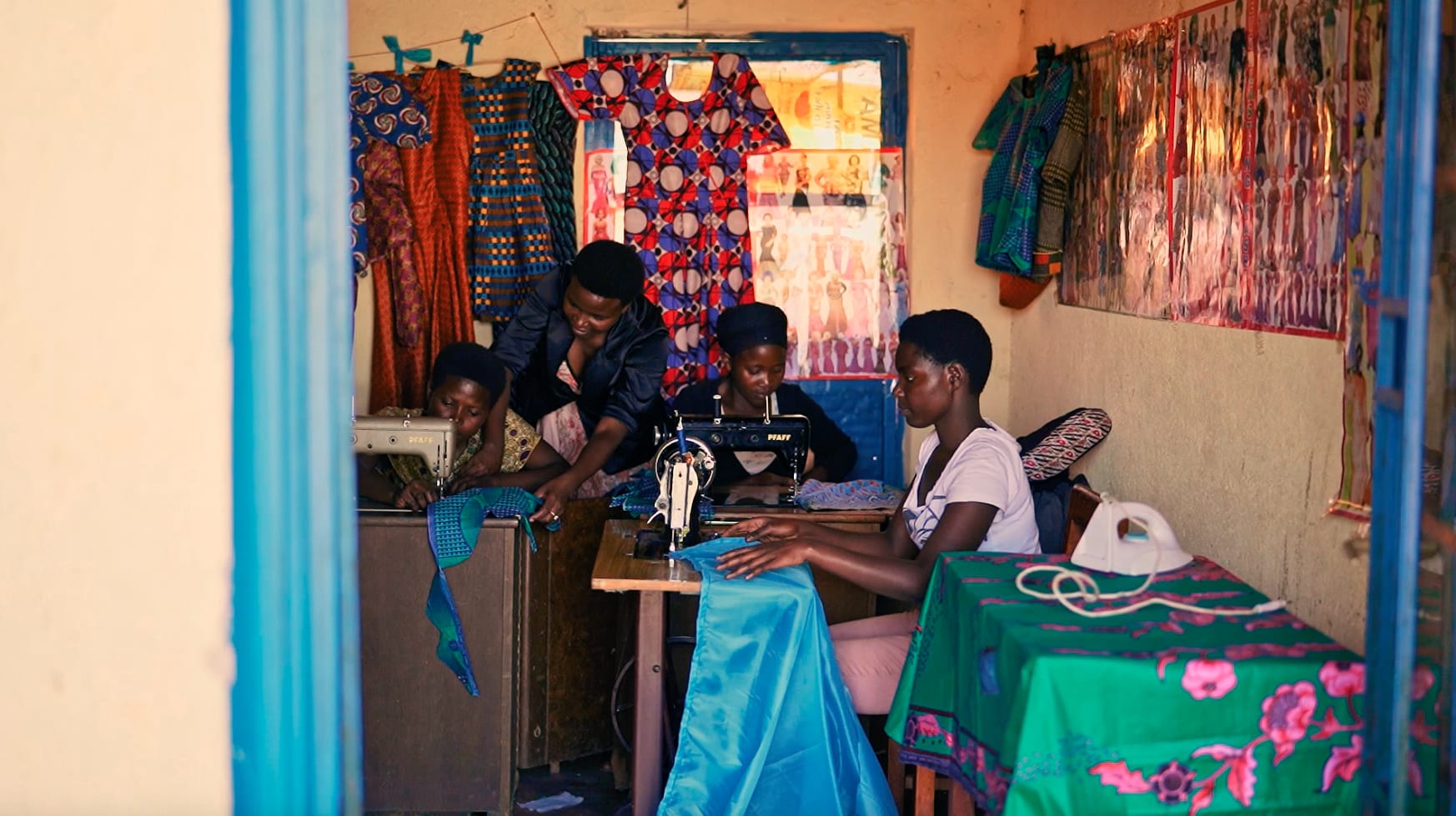